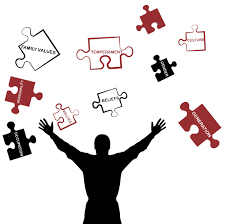 Before attempting to “read” someone, get yourself into the correct mindset.  Stay relaxed and remain fluid.  Be comfortable, sit back and let the cues come to you.

Also, compare the makeup of a person to an onion:

Define four layers of an onion about a person’s being. The deeper you get into the “onion” will determine how much you can read someone.

Determine which layer you are addressing or analyzing within the following techniques.

According to Psychology Today, words account for only seven percent of how we communicate whereas our body language (55 percent) and voice tone (30 percent) represent the rest.

1.  Pay Attention to Appearance
Is the subject wearing a suit (indicating that he is dressed for success), jeans and a sweatshirt (comfortable, casual), a ow-cut blouse (seductive) or a pendant such as a cross (spiritual)?

2.  Observe Posture
Does the subject hold her head up high, confident?  Does he cower when walking, indicating low self-esteem? Or do they swagger, a sign of a huge ego.

The Second Technique: Listen to Your Intuition

Draw into your empathetic ability and tune into someone’s core.  Beyond what someone is saying, is what that person is thinking and feeling.  Intuition is the nonverbal communication that involuntarily occurs between human beings.  A person’s exterior tells a story, his interior puts that story into perspective.  Looking for the intuitive cues.

When meeting someone, especially for the first time, a visceral reaction occurs before you have a chance to think. It is a survival instinct that tells you  whether you can trust this person or not – your own internal truth meter.

2. Pay attention to flashes of insight

In conversation, you may get an “ah-ha” moment about someone which comes to you in a flash.  Try to embed that moment into a memory that you can revisit later to further analyze the information gathered leading to that intense feeling of clarity.

During an empath probe, you may actually feel your own body reacting to a verbal or non-verbal cue.  You can feel a sympathetic pain from a story told to you (the subject relays a childhood memory of a broken arm; you, involved in a similar injury, recall that painful memory) or feel mildly depressed after being with someone who is unusually withdrawn or depressed themselves.  Identify your intuitive empathetic responses and separate them from your subject.

What the Chinese refer to as someone’s “chi”, we refer to as that person’s “energy”.  We have all encountered people with a positive energy; they are fun and energizing to be around, as we have those emit negative energy, that which can make others in its presence feel drained, tired and emotionally void.  Emotions are a stunning barometer of one’s energy.

Analyze the overall energy atmosphere of your subject (regardless of words or behavior).  Do they have a welcoming presence or do they give you the willies?

Our eyes transmit powerful energies. Studies indicate that the eyes project an electromagnetic energy similar to that emitting by the brain.  Watch people’s eyes.  Are they guarded or open?  Are they compassionate, caring or angry?  Try as one might to disguise one’s feelings, flashes of true emotion will inevitably appear in one’s eyes.

3. Notice the feel of a handshake, hug, and touch.

Physical contact is a shared emotional exchange – producing energy much like an electrical current. How does the handshake “feel” to you?  Warm, comfortable, confident, withdrawn, anxious, non-committal or timid? Bearing in mind that certain people can wilfully moderate the energy that they project, no one can exercise that type of control 24/7.

4. Listen To The Tone of Voice and of Laughter

Sound frequencies create vibrations. Emotions affect the sound emitted.  When reading people, pay attention to how the tone of their voice or laughter affects you.  Does it appear natural, comforting, energizing or abrasive, angry or whiny?

Wrap up: When beginning to profile a subject, again, let the answers come to you naturally.  Trust your instincts, especially the initial reactions and let the person unfold in front of you.  If the subject attempts to “play” you, if you are centered, she can’t subvert your innate reactions – your instinct belongs to you and you, uniquely, alone.

Finally, we’ve been working with the beta version of Crystal Knows – an app that determines others personalities – primarily geared for business relationships and synches well with LinkedIn – that is scary accurate.  Give Crystal a try and see for yourself.

As always, be safe.