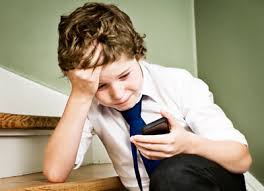 Who on earth would develop an app that would allow, rather, encourage children to bully one another?? A company that claims it is a business site seeking true feedback for executives.   Yet, a members collage banner on the site’s home page features its alleged subscribers – one is a kid holding up his middle finger, another is of a 10 y.o. girl and a third is comprised of two teen “chicks” sporting that annoying duck face pose. (Hey, if they want to look stupid,  I will use a silly description.)

The Sayat.me website was taken offline by its administrators following the suicide of George Hessay, a teenager from Goole, East Yorkshire, who had been allegedly abused over the app.

The app, which is a growing craze among teenagers, allow users to post anonymous “feedback” about their friends. It has been criticised for creating a vehicle for cyber-bullying among school children.

Sayat.me, which is based in Estonia, is designed for business users seeking “constructive, honest feedback” from colleagues and clients. It has 30 million users, many of whom are believed to be teenagers.

Last week Hessay, a keen footballer, took his own life after being allegedly bullied by his peers on the app.

Hanna Talving, the CEO of Sayat.me, said: “We have been made aware by police that they are investigating a bullying related suicide and we offer our sincere condolences to those affected by this loss.

“We deplore bullying of any kind and want it to have no place on our site. We will offer any assistance we can to the police. We have suspended use of the website to show how seriously we take these matters.”

Friends paid tribute to the teenager on Facebook, with Joely Baxter writing: “George Hessay was such a nice boy who cared about everyone and made sure everyone was ok.

“He really didn’t deserve what happened to him, nobody does and I think that whoever wrote things about him on that stupid Sayat.me thing should be ashamed and grow some balls and own up to it because whoever did it was sick in the head”.

I cannot image what was going through this promising young man’s head when he took his own life because he was being so badly cyber abused that he felt life was not worth living.  I also cannot imagine the family’s shock, pain and incomprehension at such a finite action taken by their loved one.  My heart goes out to George’s family and friends.

Now let me offer some advice to the people who were surely in George’s life but to be applied to those now in the lives of children and teens being cyberbullied:

If you believe your child is being bullied, contact StompOutBullying.org.  Anyone who has raised a teen knows that, often, adults are the last ones they may want to talk to about their problems.  Stomp Out offers a free hotline for teens 13+ who are being bullied to reach out and speak to peers.