January 27, 2020  The deadly novel (new) coronavirus, originating in China, has spread  to countries across the globe.  Travelers need to be aware of travel advisories and, the very real possibility of not being allowed to leave their host countries if suspected of infection or, the overall restriction of travel in and out of the impacted areas.

As of the date of this article, the following countries have reported confirmed cases of this new virus:

And, countries with suspected cases:

The U.S. State Department has issued a Level Four travel advisory for China: DO NOT TRAVEL.  France has been issued a Level Two designation: EXERCISE INCREASED PRECAUTIONS.  Check the Travel Advisories for your intended destination. If you are traveling abroad, in that conditions can change very rapidly in a country at any time,  opt to receive updated Travel Advisories and Alerts from the State Department.

Of particular concern is the ability of travelers to leave China if the situation there worsens.  From the State Department:

Exercise increased caution in China due to arbitrary enforcement of local laws and special restrictions on dual U.S.-Chinese citizens:

In most cases, U.S. citizens only become aware of the exit ban when they attempt to depart China, and there is no method to find out how long the ban may continue. U.S. citizens under exit bans have been harassed and threatened.

U.S. citizens may be detained without access to U.S. consular services or information about their alleged crime. U.S. citizens may be subjected to prolonged interrogations and extended detention for reasons related to “state security.” Security personnel may detain and/or deport U.S. citizens for sending private electronic messages critical of the Chinese government.

Extra security measures, such as security checks and increased levels of police presence, are common in the Xinjiang Uighur and Tibet Autonomous Regions. Authorities may impose curfews and travel restrictions on short notice.

The Chinese government does not recognize dual nationality. U.S.-Chinese citizens and U.S. citizens of Chinese heritage may be subject to additional scrutiny and harassment, and the Chinese government may prevent the U.S. Embassy from providing consular services. Read the Safety and Security section on the country information page.

If you decide to travel to China:

The Guardian reports that 100,000 people worldwide may already be infected with the coronavirus.  Avoid paranoia but do stay informed.

As aways, be safe. 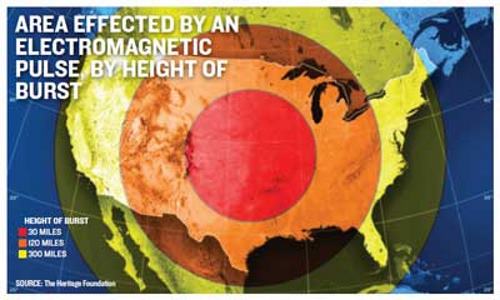 The recent, erroneous incoming missile alert in Hawaii that was transmitted via cell phones woke up the nation to the real threats we face from an increasingly hostile set of bad actors, i.e. North Korea, Iran, international terrorist groups, Russia (still) and probably China.   That incident, from the NYT:

An early-morning emergency alert (like the above) mistakenly warning of an incoming ballistic missile attack was dispatched to cellphones across Hawaii on Saturday, setting off widespread panic in a state that was already on edge because of escalating tensions between the United States and North Korea.

The alert, sent by the Hawaii Emergency Management Agency, was revoked 38 minutes after it was issued.

That alert was an error but what do we really have to fear from tech-savvy North Korea?  Many intell agencies and reliable news reporting sources like Bloomberg point to an EMP (Electromagentic Pulse)  attack.  As EMP is still rather new to the nation’s collective awareness, we’ve compiled the below facts to familiarize our readers with information on this type of weaponized event. (For the purposes of this article, EMP will refer to a Nuclear Electromagnetic Pulse.)

What is an EMP?

A Nuclear Electromagnetic Pulse (EMP) is a burst of electromagnetic radiation created by nuclear explosions from a nuclear device fired into the atmosphere over a target country.

What happens in the event of an EMP attack?

If an EMP was fired over the US, it would devastate the electrical grid of the nation, along with all its infrastructure and would lead to widespread casualties. There would be an indefinite blackout in the ensuing chaos caused by a mass failure of the power grid. In the case of any nuclear attacks, radiation is the main thing to be worried about but in the case of an EMP, the radiation is mostly absorbed by the air in the atmosphere above where it is detonated. Using the EMP as a weapon may be desirable for a hostile actor as it requires less accuracy, and an EMP blast could affect a 700-mile radius (1126 km).

How can we avoid an EMP attack and how can the damage be contained in its aftermath?

John Norden, director of operations at ISO New England Inc., which manages a grid serving six states, said the industry is unprepared for a full-scale electromagnetic attack. The power industry doesn’t really have any standards or tools to handle “black sky events’’ such as an extreme cyber or EMP attack, or even conventional war, Norden said at a recent [industry] conference.

Nonetheless, most major power companies have made a few moves to protect against electromagnetic interference. Some grid operators and transmission infrastructure owners are putting in place so-called Faraday enclosures, shields of conductive material used to protect electronic equipment and facilities. Utilities have also started stockpiling spare parts to replace any that are damaged by an EMP event, storms or other disasters.

How real is the threat of an EMP attack?

“EMP is where the science fiction of fears does not cross with reality,” he told Newsweek (Oct. 2017).

He said that EMP was discovered as a by-product of nuclear tests at the outset of the Cold War, but it remains largely untested.

“North Korea [and other nuclear powers] have not tested it, to know what would be the design, height, range, etc. to have the effect they want,” he said.

“So, the scenario assumes North Korea would finally decide to attack the U.S., to risk a war in which its leadership would die, but do so in an utterly untested, unpredictable manner, as opposed to using a nuke in a way that they know works and would definitely have a catastrophic effect on the U.S.  That is a pretty big assumption, the kind made in cruddy novels, but less likely in reality.

“If you are worried about North Korea, worry about the actual and far more likely use of their nuclear weapons, missiles or conventional cannons, rather than the stuff of weak science fiction.”

The EMP Commission though remains convinced that the threat from a North Korean EMP attack is real—with a primitive, low-yield nuclear weapon likely to cause enormous destruction to U.S. electronic infrastructure if detonated at height.

Editor’s Note:  Given the vastly opposing views from the scientific, intell and military communities regarding the viability of an EMP attack on the U.S,  we will be routinely scanning for updates on this topic and posting as warranted.

The Beacon Bulletin is brought to you by our parent company, Beacon Network Investigations, LLC. BNIinvestigations, com (347) 443-1737 For the trial law and legal community from an investigator's perspective. We're a digital investigative information company. We DON'T dispense legal advice, respond to anonymous queries or black hat your enemies for you. (Internally, however, points are alloted for perfectly wordsmithed compliments.) We DO hope to inform. That's our business.